Thousand Islands Tour Boats of decades ago – where are they now?

American Boat Line logos from 1963, 1972, and all three aluminum hulls on a vintage postcard

Imagine if you could suddenly stumble upon some thing, some item, that holds fond memories for you, and then re-live some of those memories?

Let me show you how that happened to me.

That’s a question I’ve asked myself many times, and started looking into.  I finally have an answer.

My search led down a number of different paths, including phone calls, emails, Google, and personal transportation!  Along the way, I pretty well confirmed a rumor that the original wooden Adonis was built on a PT boat hull.  However, some emails I received about Adonis expressed doubt about that due to various dimensional discrepancies between PT boat hulls and the Adonis.  That rumor’s plausible, though.

I discovered that the three aluminum hull boats were built by Paasch Marine in Erie, Pennsylvania.  It appears Paasch went out of business so I wasn’t able to contact them.

However, the most exciting discovery came several summers ago when I got a lead from a string of internet searches.  It was followed by this tweet:

It was an exciting find, and I’ll tell you more, but first I have to correct that tweet because a bit more research revealed she was actually the Neptune.  Was she the only one?  I think not….

Some Background on the 1000 Islands tour boats

The wonderful Bowling Green State University online database has information for all four ABL double-deck vessels.  I’ll set the stage with that, and I’ve linked to their original record card so you can see the full history from their site:

American Adonis: The record card shows she was built in 1943 at Huckins Yacht (so the PT boat-hull connection seems reasonable given the year, but did Huckins build PT boats this size?).  It also shows that in 1980 she was owned by Whaling City Ferry, Inc. and had name changes to Whaling City and Sea Breeze.  I heard rumor that she toured the Boston Harbor area as well, but one conversation I’ve had shed doubt on that because of the salt water aspect (hull, engines).  I wrote to tour companies in Boston and New Bedford, MA but got no answer.  Unfortunately, she’s the one tour boat I have the least information on.  If you have any info, I’d love to hear from you !

American Venus: The Venus was the first aluminum hull tour boat for the American Boat Line (ABL).  The record card shows no name change, and International Boat Tours as the current owner.  What I’ve found confirms that she still exists on the east coast (and I’ll reveal where shortly).

American Neptune: She was the second aluminum tour boat for ABL.  The record card shows current owner as “Paradise of Port Richey, Inc.” with several name changes along the way (“ISLAND HOPPER”, “MISS CLAYTON III”, “EXPRESS SHUTTLE”).  What I was able to find out led me to the Port Richey area, but that’s not the whole story…read on!

American Adonis II:  The third aluminum hull for ABL, the record card shows ownership by International Boat Tours, Inc. in 1972, and a name change to “ISLAND PRINCESS” at one time.

Where does this lead?

My search started by poking around the internet with different search terms based on the database information above, as well as emailing tour operators who could have been operating these ex-ABL boats.  Eventually, I ran across a website for a tour operator in the Boston area (Boston Harbor Cruises), and what I saw really caught my eye!  Take a look – what do you see?

What caught my eye from the Boston Harbor Cruises website: the unmistakable hull lines!

She sure looked like an old ABL tour boat, but something seemed wrong: the top deck was half missing.  So off to Boston I went one hot summer day with my son.  It was busy on the waterfront at the height of the tourist season, and it took a while to find parking but eventually we were on foot and quickly located the ticket office.  A glance toward the harbor froze me in my tracks.  Immediately I recognized an old friend.  I urgently asked one of the staff if I could take a closer look, (bypassing a ticket for now), and they said yes.  I walked quickly to the dock and was greeted by several deckhands preparing for the first trip of the day.  Here was the big moment, and I began… “Would I be able to speak to the Captain?  I think I used to know this boat years ago when I was a kid.”  They said “Sure!” and pointed me to a young gentleman standing on the aft deck by the loading ladder… the same deck I stood on in the 1960’s as I boarded her in Clayton.  Or, at least I hoped so.  His name was Captain Chris.  I stumbled to get my questions answered, nervous that my quest for an ABL boat would soon come to a disappointing end.  I told him I thought this tourboat looked a lot like one I used to know in the 1960’s in the 1000 Islands, either the Venus or Neptune.  Before I could get the next sentence out, he confirmed it.  I was stunned.  We had a great conversation while he invited me aboard to look around.  You have to imagine what this was like.  In my head for decades is an image of shiny aluminum and double decks, rows of seats, flag pennants strung aft from the mast, snack bar astern (important things to a kid).  I always wondered if I’d see these things again and what it would be like.  Perhaps a disappointing, rotted old hull being used as a work boat or sitting in a scrap yard.  Today, here, was part of the answer.  I was standing aboard the Neptune, and it was a grand experience!  I asked question after question and Captain Chris had answer after answer.  He seemed quite fascinated in discovering some of her history, too, since he was only familiar with today’s version of the Neptune.  Today, she is: the “Island Adventure”.

Chris asked if my son and I would like to be aboard for the morning harbor tour.  It wasn’t the plan for the day, but certainly the answer was yes!  The smells, sounds, and vibrations all came back as the engines started and we backed out of the mooring.  Yes, we backed out – recall the ABL boats always arrived past the Clayton coal docks and pulled up near McCormick’s Restaurant, then simply continued in that direction for the next tour.  As a kid, I had no idea she could go backwards!!  This day, though, she spun around on her props and slowly made her way out to the harbor.  For the next hour or two I walked the decks over and over, missing Boston completely, as I relived every square inch and memory of this fine craft.  Some things have definitely changed on her over the years.  The hull has been painted, the cockpit is now enclosed, the upper deck is missing half the roof, the hull has some obvious modification via a cutout to allow for a midship boarding ramp.  Make no mistake, though, she is a still a solid performer!

Captain Chris said she summers in Boston and winters in Florida.  Some other interesting facts he shared…

Here’s a video I made of the tour I took with my son that day.  Remember how big a wake she threw?  Well, that’s evident in the video as well, though she was lightly loaded this day and the wake was a bit flatter than when she was fully loaded in Clayton.

Also, my son took some great shots for you to see: 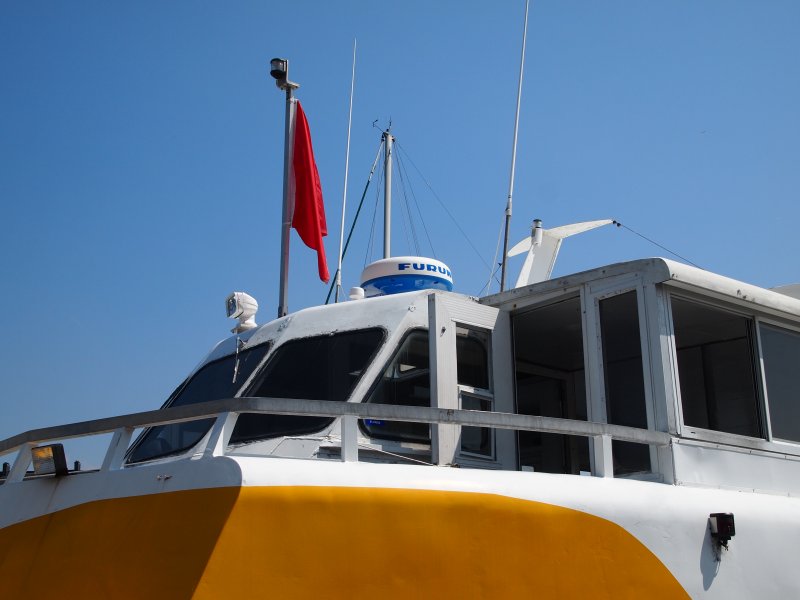 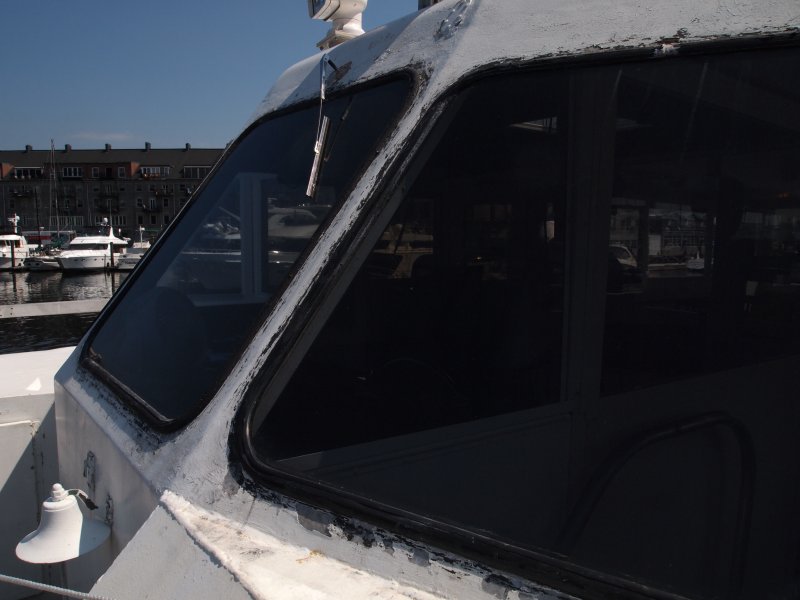 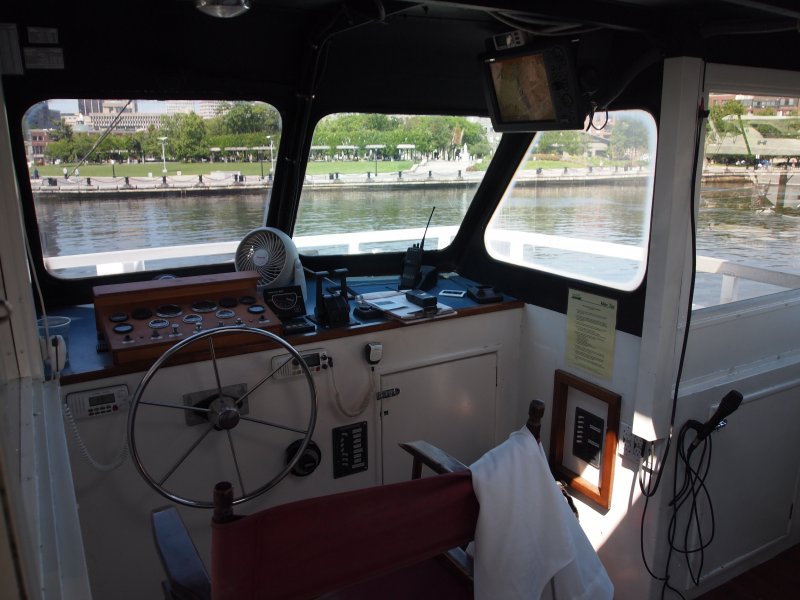 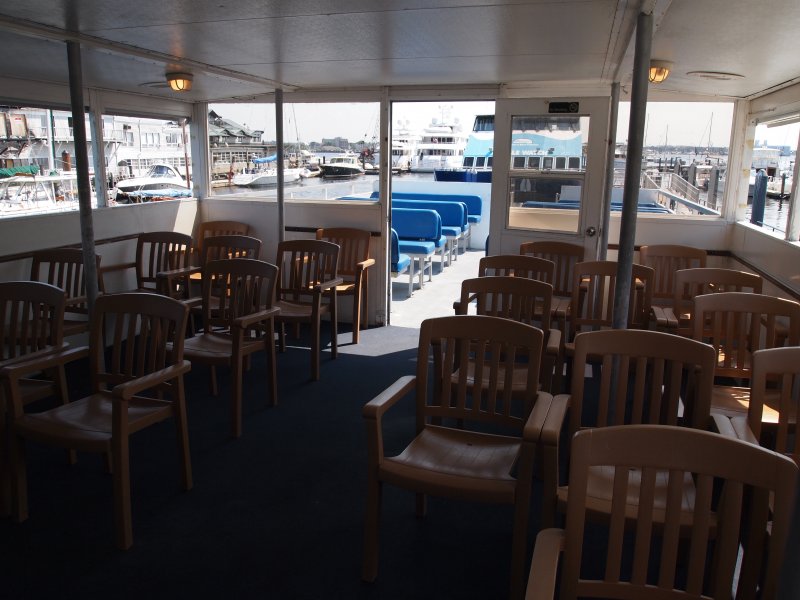 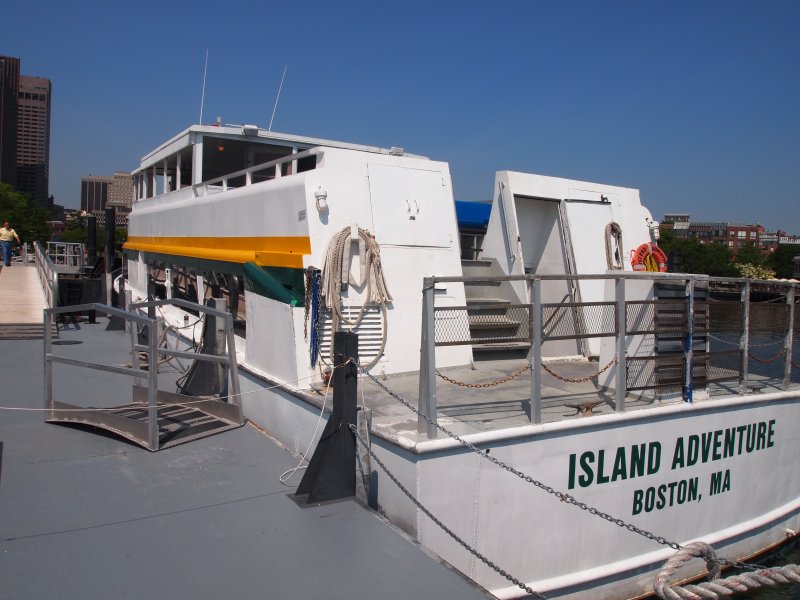 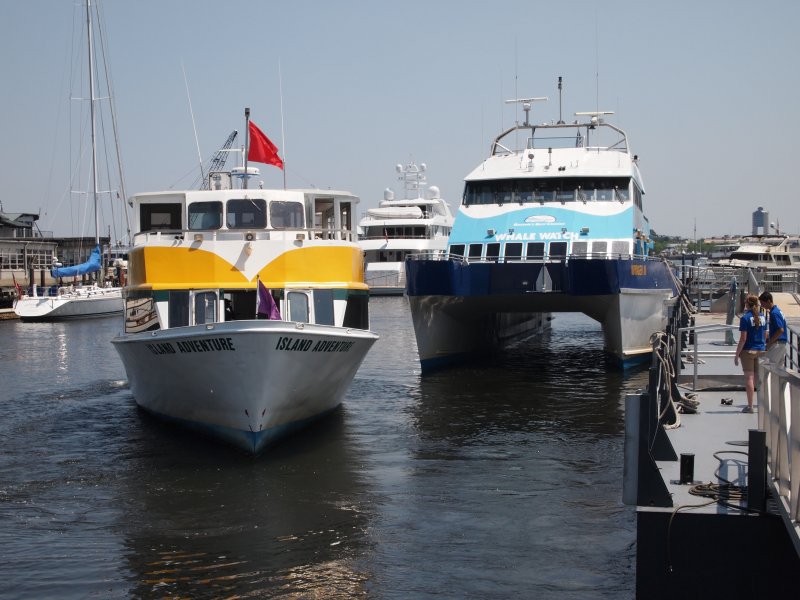 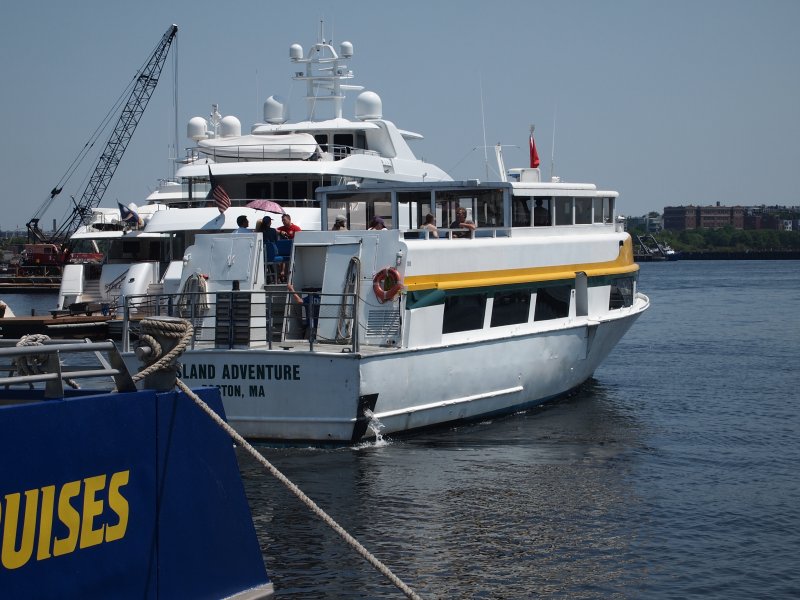 Next… the American Venus:

The hunt for American Venus took an interesting turn in April 2013, when out of the blue I got an email with this picture, from a man named Bill McGovern, who had been to DC and said “I took this picture in January in Old Town Alexandria VA.  Probably the same boat that done tours of Baltimore Harbor for years.”  I did some initial research on a few things and determined that this vessel (Miss Christin) could be the American Venus.  For example, compare the Venus with the Miss Christin:

I searched for DC area tour boat operators and found one with a picture of Miss Christin; the Potomac River Boat Company.  I called them and spoke with the President, Mr. Polak.  He was very helpful and was able to confirm by hull number that she was formerly the American Venus – “The Miss Christin’s official number is 281864, which matches the official number of the American Venus”.   Another confirmation!  I plan to visit her someday in DC, and will certainly post some pictures.  It’s good to know she keeps on touring.

Further confirmation of the Baltimore connection comes from the Potomac Riverboat Company website page highlighting the Miss Christin.  It says “Before becoming part of PRC the Miss Christin was used in Baltimore, Maryland as a tour boat.”

I reached out to them to let them know the pre-Baltimore history and I’ll let you know if they reply.

They have some wonderful photos of the Miss Christin on Flikr.  If you remember the American Boat Line Venus, see how she’s not only changed over the years but also has she’s remained the same.  There’s a timeless, classic beauty to these old Paasch tour boats.

The only information I’d found up to a point on Adonis II came from Captain Chris.  It made me hopeful – he said that “one is for sale in Stuart Florida called the Island Princess”.  If you recall what I stated earlier, this name is the one used beginning in 1972 for American Adonis II.  I tried searching for more information with no luck at first, and then one winter I found her for sale via an ad on Boats.com (the ad has since been taken down)!  But it doesn’t end there…

I located her!  The internet yielded some results last week when searching for information on Paasch boats.  This video on YouTube shows her today.

Well, I’m not sure!  I was amazed I even got this far.  I always assumed that only three aluminum-hulled vessels of this design were built by Paasch because, well, I only knew of three.  However, when I was speaking with Mr. Polak at Potomac River Boat Company, he was surprised by this since he’s seen ads for vessels and parts in Boats and Harbors online.  So, I’ll be on the hunt for more information and may eventually find some other vessels of the same lineage.

I do know that I’m happy about the search and the results.