Calumet Island Marina in the 1960’s

The magic and beauty of Calumet Island I knew as a kid with my family will always drift through my mind.  Of course, it was a marina back then, and for a decade it made quite an impression on me.  Come on back and catch a glimpse…

…our Steel King was kept at a marina in the heart of the 1000 Islands. Calumet Island Marina was the place, and this wonderful setting was where I spent many a summer in the 1960’s. In past history, Calumet had a castle and looked almost fairy-tale like… 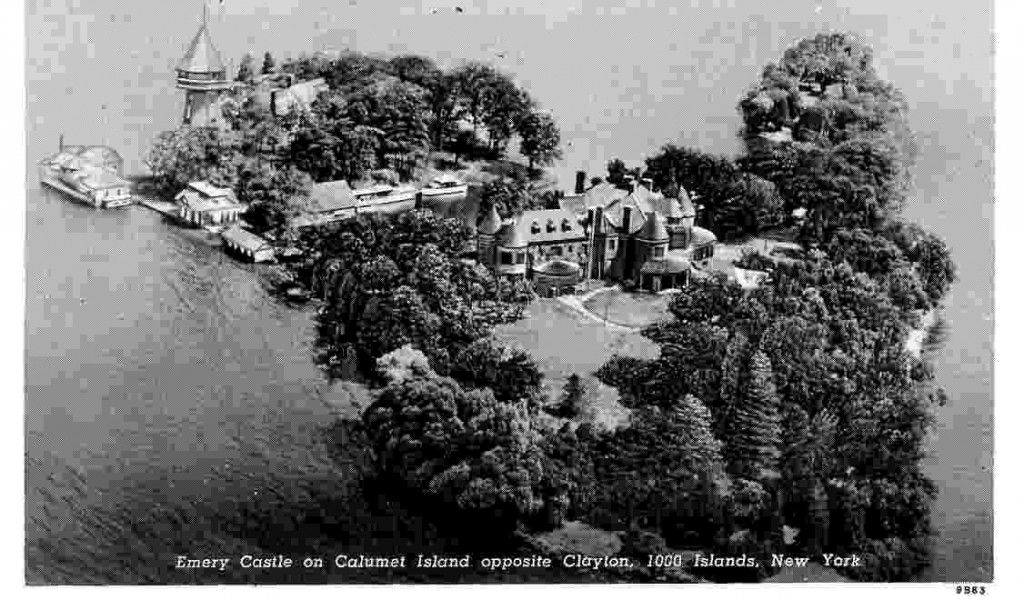 and in that same spot where you see the large cabin cruiser above, many many years later my father’s Steel King floated, our summer weekend “home away from home” 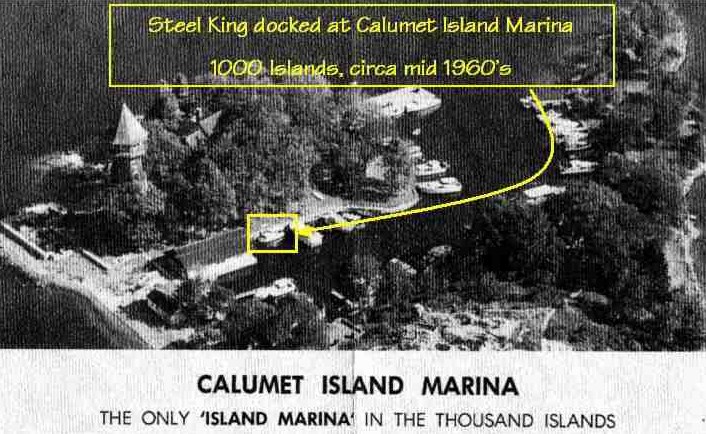 Love the 1000 Islands, too? Check out some nostalgia on 1000 Islands Nostalgia link above!

1960’s Calumet Island Recollections
Calumet Island, part of the 1000 Islands region, changed a bit from the time my father’s Steel King took harbor there around 1960. I was young, but do recall that the first caretaker I knew of (I think his name was Mr McCarthy) had a small Chris Craft cruiser docked there, and the owner of the island was referred to as Dr Patch. There was a diesel generator that ran power on the island between about 6 AM and 10 PM, and one day in the early 60’s a small landing craft rolled up on the rocky beach behind the generator building and began the installation of shore power to the island, silencing the noisy generator for the rest of my ten-years of visits there. Originally there was a fuel pump located at the end of what I called “the blue dock” inside the harbor, but as more and more boats came to use the marina, it was dismantled and the fuel dock moved to the very tip of the island (near a huge red and blue “ATLANTIC” sign, for the brand of fuel, that you could see on the left ( to port…) as you entered the harbor). Early in the 60’s the island took on more of a full-service marina flavor (sometime in the mid to late 60’s, there was even a Calumet Island marina store that opened in Clayton!), and I recall many “finger docks” sprouting from the stone periphery walkways to accommodate the growing number of boats there. Mid-60’s, the yellow building at the end of the harbor, which I believe was a machine shop earlier in life, became a service (and sales?) shop for a line of “Gale” outboard engines sold in the mid to late 60’s. The island’s new caretakers (Rollo and his wife Betty) still used the old Chris Craft (which by then was painted grey and white, covering the original wood upper structure), but also had a small runabout that was kept in the left-side of the boat house (my father’s boat was kept in the right side). Their runabout even had a nice yellow and white Gale engine on it!  Throughout the decade, the roof on the skiff house was painted bright orange, and runabout’s hull was painted that same color when used to ferry customers between the mainland in Clayton and Calumet. I guess it was an advertising thing ? 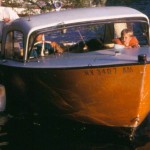 As the marina grew, and services expanded, there was a huge motorized boat sling installed outside the Skiff House. This included construction of a dock parallel to the skiff house’s cement “front deck” and a metal tray was placed on the dock to help guide the sling’s wheels during transit. This sling allowed for boats to be removed for repair or winter storage. Also in the mid to late 60’s, the area under the front of the skiff house was used as a sort of island store during the summer. A fellow named Skip used to work there selling ice cream to us kids (I think he even played some sort of instrument that resembled a tambourine on a stick and sang a couple of songs every now and then (I think “Henry the Eighth” was one of them!)). Late 60’s there was another construction project… on the old foundation of what was the laundry building I believe (when the castle was there), the “Teen Hut” was constructed. There were enough families with boats on the island by then that the older kids needed something to do I guess. One of the last changes I recall from the late 60’s period was a large dock that sprang from the southeastern shore (toward Clayton). I never saw it get much use except for an occasional seaplane docking, and when I visited the island in the early 80’s it was gone (as was most of what I remembered from the marina days, like the rope swing that used to hang from a huge tree near the “yellow house”… scares me now to think about swinging out over the huge rock and boats that were under the rope’s arcing path (never did check to see if it was frayed!!) There were many boats and families I remember from back then as I grew up, a little more each summer. Some boats that come to mind are: 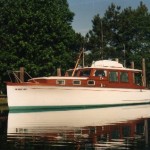 Climbing the paths to the ruins, watching the ships go by, swimming off the cement dock, fishing, throwing stones from the beach near the cottage, fishing trips to Grindstone Island, touring the 1000 Islands on the Adonis, Venus, and Neptune… what a blast!

These maps attempt to show the changes I recall occurring over a ten-year period in Calumet’s history. Hope you enjoy them… if you were there then, drop me a note! 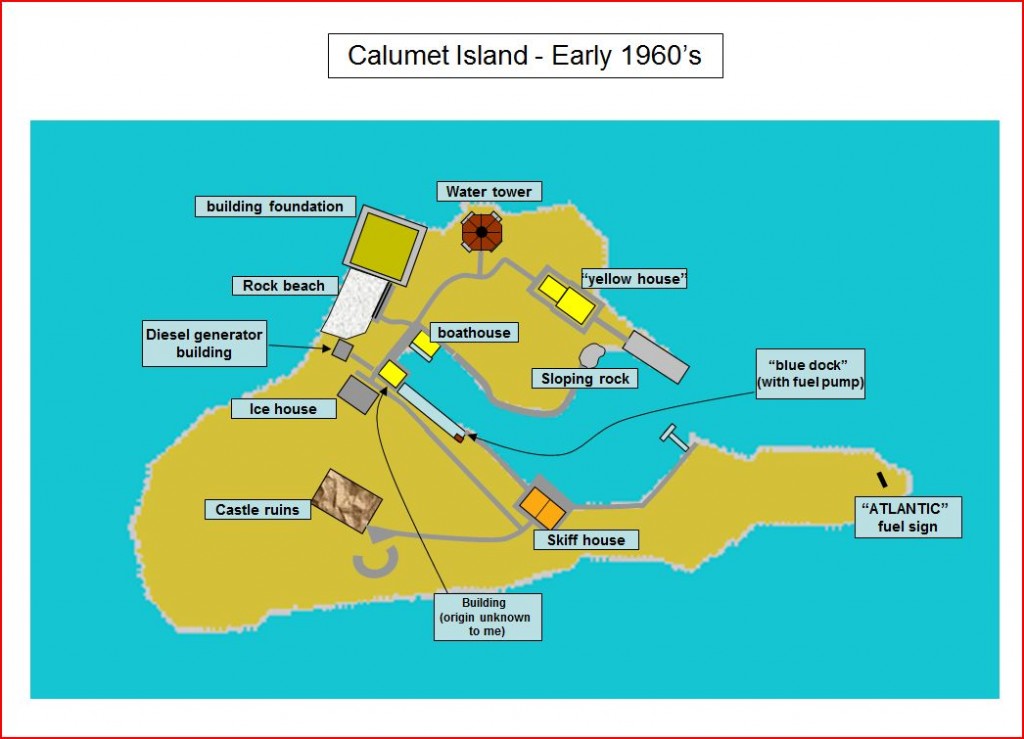 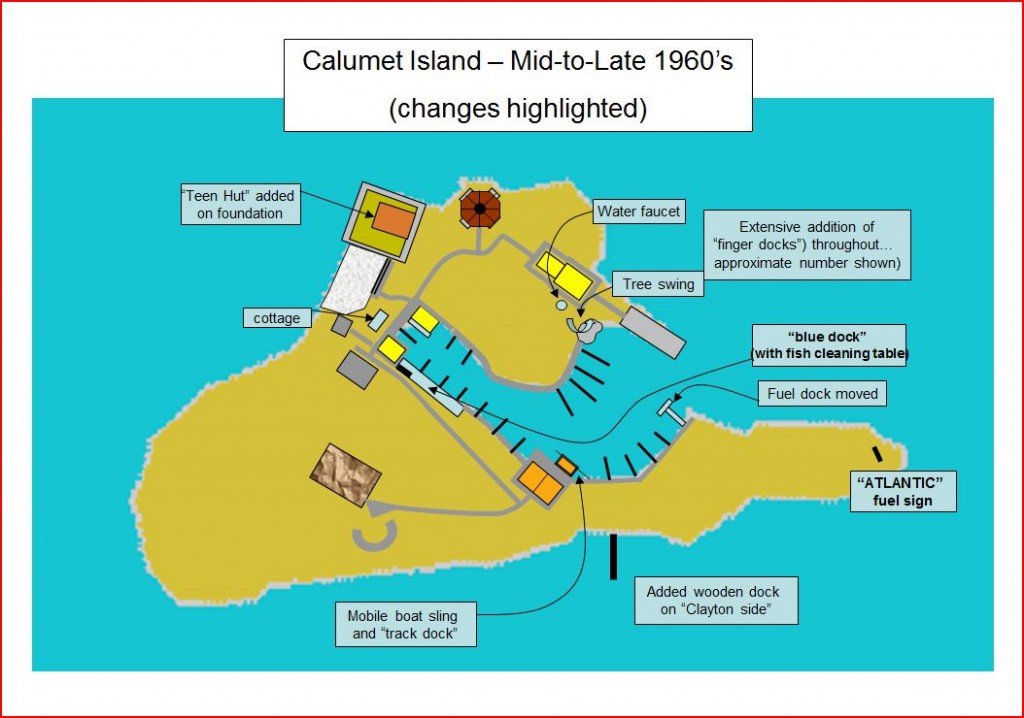